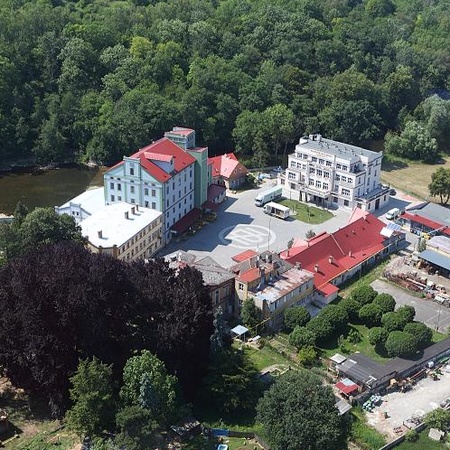 The Druzstevni zavody Drazice company is the No. 1 producer of water heaters in the Czech Republic, which is well know all around Europe. The company exports its products to almost twenty countries all around the world.

Water heaters with the Drazice label are highly demanded by the Czech consumers as evidenced by the dominant share on the Czech market in the amount of 50 %. The basic activities of the DZ Drazice company consist in production and sales of water heaters. In the production programme of the company there are different models of water heaters with vertical, horizontal, stationary, electric and combined design in volumes from 5 to 1000 litres, and also indirect stationary water reservoirs (exchangers) in volumes from 100 to 1000 litres.

Among the important subjects of activity belongs production of water reservoirs with indirect heating designed for producers of gas boilers. The aim of the DZ Drazice company is to strenghten its leading position on the Czech market and to range among the best European companies in this field of activity. The solid base of the company's success is the excellent tradition and quality of our products, responsible and perfect customer service and good reputation of the company responsible to the environment protection.

Beginnings of the later cooperative business: Marie Kyselova, local miller´s widow, handed over the grain mill to become part of the company´s property, and this was the origin of the limited liability company called “Grain warehouse, handcraft roller mill and bakery” based in Drazice nad Jizerou.

New leaders captained by Vaclav Cancik, acting upon recommendations of Karel Novak, professor at the Technical University in Prague, turned their focus on a very promising field, namely the generation and distribution of electric power. In 1910, they built a hydroelectric power station with two 300hp turbines. In 1917, the power station in Drazice served 69 villages with 8,111 users.

The company had come to top during the second half of the 1920s. It had 220 employees and owned 8 hydropower plants situated on the Jizera river, together with a steam power plant, 2 mills and a power distribution grid serving 383 villages with 24,080 users. The company´s turnover in 1930 was remarkable and hit three quarters of billion Czech korunas at that time.

After the forced sale of the power distribution grid and subsequent nationalization of the greater part of the cooperative´s assets, the company moved its business to products and services for the general public, in particular to household and sports sectors.

One of the business lines became the custom production of water heaters under the leadership of the former sole trader Mr. Krovak.

After political change in the Czech Republic in 1989, the cooperative was divided into autonomous businesses. One of those companies was the privately owned company under the name Druzstevni zavody Drazice-strojirna, s.r.o., which took over the production of water heaters.

Production of water heaters grew rapidly during this period. The range of products was expanded, machines and technologies were upgraded and production was growing continuously. Major upgrading was done at the end of 1997 by installing a new enamel coating line. The company had become the biggest domestic distributor of water heaters and began to expand its exports in 1994. The company´s products are exported to more than 16 European countries. The company produced 95,000 water heaters and had 190 employees in 2003.

A new large-span building was built in 2004 to allow installation of a new enamel coating furnace. The furnace was built during summer 2005 and allowed the company to increase the capacity of the enamel coating shop, and to use an improved enamelling process at the same time. The product portfolio was expanded in 2005 by introducing storage tanks and new types of square-shaped water heaters.  During the last year of that period, the company produced 115,000 water heaters and its team expanded to 210 employees. The production capacity and the product portfolio are supposed to further expand and the existing lines of products will be continuously innovated in the future.

In 2006, 100% of stake in the Druzstevni zavody Drazice – strojirna s.r.o. was transferred to the Swedish heat pump maker NIBE Industrier AB, who became the sole owner of DZ Drazice.

During summer 2007, the company´s production further expanded by operating two assembly lines and the capacity increased up to 150,000 items per year. DZ Drazice began offering heat pumps from NIBE in addition to other products. Sale of solar assemblies, flow-through heaters and stainless steel heaters made by NIBE was also started during that period.

In 2011, a hybrid heater allowing connection to photovoltaic panels was introduced into the product portfolio. Another product presented that year was the OKHE SMART water heater offering an intelligent control system and multiple functionalities.

New storage water heater OKHE SMART EVO 3 allowing remote control via a smartphone app was introduced at the FOR THERM exhibition in September 2014.

A new line of water heaters OKHE and OKCE is produced since 2016 and the functionalities of the OKHE SMART model are being improved on a continuous basis.

The product range of electric heaters has been expanded with a flat version – OKHE ONE. Its depth reaches only 30 mm and is therefore suitable for placement in confined spaces or places with limited installation depth.

This year was marked by new small-volume flow heaters in models 5.1 and 10.1. They won 2 gold medals in the Czech Product Association competition.

In February, we won the award Obal roku 2020 (Packaging of the Year 2020) for the mono-material packaging solution for the TO 5.1 and TO 10.1 water heaters. The new ecological packaging is made of corrugated cardboard (completely without polystyrene).
We became the holder of AAA Platinum international award of the company Bisnode which is a prestigious independent rating with more than 112 years of tradition. This certificate confirms that we are among the most trusted companies in the Czech Republic because we have been meeting the strictest criteria for evaluating economic entities for more than five years.
We won the prestigious BIG SEE Product Design Awards 2021 for the design of the TO 5.1 and TO 10.1 electric water heaters.
We won the gold medal in the competition Český výrobek roku 2021 (Czech Product of the Year 2021) for the limited edition of the OKHE ONE/E 80 water heater in black and silver colours.
We have upgraded one of the best-selling products TO 20 and changed its design. The result is a new product designated as TO 20.1.

The Dražice brand won the important Czech Business Superbrands 2022 award sponsored by the British organization Superbrands: the most recognized independent global authority in the field of evaluating and valuing business brands according to their economic results and reputation.
We won the AOVT 2021 award for the innovative product TO 20.1. This is a prestigious and highest award for innovative products, services and processes in the field of water and heating.

In 2016, the company reported spending on research and development in the amount of 1,079 thousand CZK. After the successful production launch of the new generation of electric water heaters with electronic regulation OKHE SMART in the second half of 2015, the start of the serial production of the OKCE water heaters was crucial for DZD in 2016, which we managed to do during the spring months of 2016. The OKCE water heaters represent approximately 50% of all production.

In the near future, we expect to finish the development of completely new flat heaters and to start their serial production. Another priority in research and development in 2017 is to complete the development of storage tanks of higher capacities. Both of these activities will lead to the expansion of the DZD product portfolio.

Our code of ethics

Our code of ethics